View source
watch 01:36
We're Getting Mutants in the MCU - The Loop
Do you like this video?
Play Sound

Chop Chop Ninja is a Canadian animated television series geared towards kids ages six to twelve that airs on Teletoon. It first premiered on the French-language version on September 1, 2018 before airing on the English-language version on October 6, 2018. The show was produced by the Montreal studio Sardine Productions and animated by Feitong 7 Cartoon. The show is a spinoff of the the 2014 animated television short series Chop Chop Ninja Challenge, which also aired on Teletoon.

Teletoon released on an online game based on the series, titled "Chop Chop Ninja Academy".

Iro, an exuberant young ninja, has one big dream: to become THE Chop Chop Ninja. There is no higher achievement for a ninja! Is he ready for it? Not even close. Does he want it? More than anyone. Will getting there be fun? Absolutely! Along with his three friends and classmates at the Academy, Jo, Neeko and Tetsuo, Iro protects his island home from a steady onslaught of treacherous and not so treacherous villains, and protects the mysterious Medallion from the clutches of Magic Master, in hopes of proving that he deserves the legendary title of CHOP CHOP NINJA.

Jo, Iro, Tetsuo and Neeko first appeared Chop Chop Ninja Challenge, with different apperances, before having new character designs and having voice actors. They even managed to made some appearances on Canadian-French-British ROBLOX TV Studios series Playworld - also, in season twenty-five of Playworld, Neeko becomes a butterfly in episode two, titled "Neeko Butterfly", which updated the opening sequence to it as well. They also appeared in the seventh season of Bree's Room. Neeko is expected to go into "Butterfly Mode" in a future episode of the season. They also appeared in every episode of season four and onwards of Toopy and Binoo World. The Chop Chops are currently outside of the Tiny Loser Chamber in a "Rainbow Character Elimination" competition, and have not been penalized in any way so far, nor are they eliminated yet. They are currently competing on opposite teams.

The main characters from left to right. Jo, Neeko (on a rock), Iro and Tetsuo. 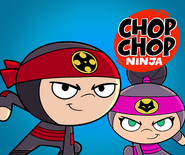